​Please repost/share this for us, we’d really like to get a diverse and well rounded amount of submissions!

“But who will do the dishes after the revolution?” This tired question has been asked to countless anarchists, communists, and others pursuing systemic change. But, we don’t have to wait for the rev to give an answer. Anarchist Housekeeping: Collective Living Under Capitalism is an attempt to cobble together the stories of anarchist collective living within the United States. The goal of this anthology is to share what it takes to build a successful collective, what works and what doesn’t, what you wish you knew, why you think collectives matter, and what we can take away from collective projects.
Submission Deadline- November 1, 2017

4 years ago I had an idea for an anthology I wanted to put together. I wanted to create a work that would serve as a how to, or how to not, for people intersted in creating or moving into an anarchist collective house or community. I was discouraged from the project by criticism regarding my own mistakes when it came to collective living. 4 years later and I am not living in a collective, but the project still interests me, and still seems to be something that could give voice to many people as well as help people avoid making mistakes like mine or other people’s. My own failures and mistakes in collective living are just part of why I think this project is important, and I do not think will hinder my ability as an editor. I have a strong background in writing and editing. I have one self published book, and have published probably a dozen zines over the years.

Over the years I have participated in many discussions with people who have lived in anarchist collectives and folks interested in the idea. It seems high time to put advice, history, and stories from a diverse group of people together. When I say diverse I am including race, class, gender, sexuality, age, geographic location, ability, etc. All of these types of issues can affect how well anarchist collective living works, or doesn’t.

I want to put together an anthology of essays on collective living in anarchist spaces. I haven’t seen one that was a helpful/informative guide or something with advice, shared lessons learned, examples of how different spaces pull it off. I’ll edit and try to have published via PM Press or AK Press or some other radical/anarchist publisher.

In terms of submissions, a wide variety of forms will be considered. Lists, poems, essays, historical nonfiction, and photographs are the forms I can think of but others may have more. If you have or are currently living in an anarchist collective housing situation, please consider sharing your experience, ideas, lessons, history, etc.

Anyone who wants to submit a proposal should email me at mokarnage@gmail.com Deadline for submissions is Nov 1, 2017

I was interviewed on March 27th on WRIR’s Open Source Program.
If you missed the airing on Friday, you can go online for the next week or so and listen to the show on their Tunein player.
http://wrir.org/tunein/
I will try to post the permanent link once that becomes available.
The interview is about Monroe Park and the bid I submitted on the park Lease, essentially in protest of the concept of privatizing our public parks.
Background articles on the issue at http://www.wingnutrva.org

Photo by Ira Birch, me and Phil Wilayto from the Virginia Defenders of Freedom Justice and Equality at the march!

Yesterday I attended the March Against Mass Incarceration, organized by Collective X. The rally met and parade started  in Clay Abner Park. A huge, huge ‘Thank You’ to Collective X for organizing this event over the past few months, and collaborating with so many other local people and organizations to do so.

Some friends at the march- photo credit to Kontra RVA

There were speakers from a variety of anti-prison organizations there. Unfortunately the weather was gloomy, and it wasn’t the best for standing around listening. The marathon also made it difficult for folks to arrive and so the whole thing started late. But it was really great to see so many passionate people and to all get some exercise and networking together.

Two things I struggle to navigate with these types of events are how to best accommodate and be accessible to kids and differently abled participants.  I would love to hear from folks who are kids or struggle physically with marches about what they might want to see changed in the future, or what is possible. I find this complicated, because I think that aside from the empowerment of participants, marches are vital for visibility of movements. I want to see marches with long routes, through highly populated areas. But I recognize that long routes aren’t accessible. I was carrying a fairly heavy medic pack, and I was definitely feeling the burn towards the end of the march.

There were also folks with dogs (who I love, love, love seeing at these types of events) who ended up having to pick up and carry their dogs. It is also important to note that for many folks bringing a dog isn’t just a fun thing to do, but they might need their dog because it is a trained service dog.

Kids also have shorter legs, and sometimes shorter or different attention spans. Figuring out how to truly make events all ages is important. I feel like this may sometimes mean keeping speakers shorter, or providing childcare or activities (like upcoming Wingnut Kid Kits which will be launched at the VPA in January).

Maybe it also means having parade floats kids and dogs and elders and folks with less mobility can ride on? I don’t have all the answers, but I’m pretty sure everyone in Richmond is smart enough to come up with a variety of solutions that will work for a variety of needs. Our movements will be stronger if we can figure out how to include more folks, and what they need to be included. Listening will be a huge part of this.

I had a great time at the March organized by Collective X- always nice to come together with so many friends. Photo credit to Kontra RVA

I was a volunteer street medic, but luckily we had no need for medical help. However, it is definitely good practice to have some trained medics at these events. We took the streets from Leigh to Adams to Broad to Harrison and back down Leigh. There were no arrests or altercations during the march. My understanding is that Collective X had someone or someones who as police liason ensured we would not be attacked by RPD. The bike ushers did a great job of corking intersections and helping to escort the march and keep everyone safe. There were also NLG trained legal observers, and no doubt, copwatchers in attendance.

Richmonders have taken to the street in greater numbers and more often this year than I remember in the past. We’ve had the VPA,  March Against Monsanto, May Day Parade, Halloween Parade, Critical Mass Bike Rides, and this March Against Mass Incarceration.  I hope we keep this momentum up, building our movements, empowering each other, and fighting for a better world.

I also see Richmond getting better at taking the streets and organizing marches and parades. More folks are organizing, and more folks are participating. We need to incorporate things like continuing education and self care into our movements to ensure we can keep this up, and so we can do it all better in the future.

In January of 2013 the Virginia People’s Assembly will meet and March, so stay tuned for information on that (below cut).

Much love, and see you in the streets! 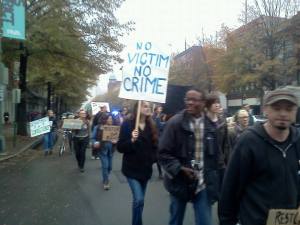 No seriously, in the streets, join us next time! Photo credit to Jack Johnson of FNB and WRIR!

Links to relevant organizations and background info below:

END_OF_DOCUMENT_TOKEN_TO_BE_REPLACED

Fragments of Karnage Zine now out!

My newest zine, Fragments of Karnage, a poetry compilation is now out.

28 half size pages, black and white, handwritten, compilation of finished and unfinished poems in a variety of formats from my many notebooks, and a few drawings as well.

mokarnage [at] gmail.com
By Appointment Only