Richmond celebrated  Transgender Day of Remembrance with our 8th annual  Memorial Service yesterday, November 20th. It was the first year I attended. My friend Tammie and I spent a majority of our day acquiring produce and preparing some food to share at the reception after the memorial service. We were happy to do so and happy to see the 200 or so folks who came out to support each other. 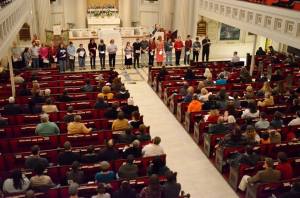 Photo by Kontra RVA of some of the attendees in the church, and the folks lined up to present stories of Transgender people who were murdered

The TDOR memorial was held at St. Paul’s Episcopal Church downtown. The committee that organized it did a really great job. The sharing of stories was moving, and it was only through the clenching of teeth that I avoided breaking down. The song performed by My Darling Fury was beautiful. There were a couple of speakers, some sharing personal experiences and some talking more generally about the issue of violence directed at Transgender folks. After the service, the group assembled on the steps of the Church holding candles. 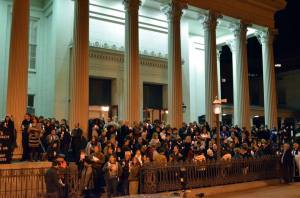 Photo by Kontra RVA of folks gathered on the St. Paul steps after the service

Not to take away from the efforts and successes of the organizers and presenters, but there was one aspect of the event which I found to be uncomfortable. When we were outside holding candles, the Chief of Police Ray J. Tarasovic read a proclamation from City Council and (Dis)Honourable Mayor Dwight C. Jones.  This isn’t the first year Jones has issued such a proclamation (I’ve found news coverage of these proclamations back to at least 2010).

Mayor Dwight Jones is certainly not honorable (Dwight the Blight!), and as much as it might have made some folks feel better to hear the proclamation from him and City Council read by the police chief, there is a strong need to push back and demand more. If the Mayor and City Council and Police Chief want to be allies of trans people it is going to take a hell of a lot more that just showing up to a vigil and a memorial service with some fancy words.

The presence of police is not a welcome one for all attendees of such events. Many folks with histories of drug addiction, sex work, and crimes of survival are likely to have had negative run ins with the police before. The friendly face the police give to law abiding lgbtq folks is much different than the one the reveal to “criminal” lgbtq people.

The Richmond Police Department and City Council can talk solidarity with transgender folks in Richmond, but they fail when it comes to walking the walk.

The police and the sheriff’s department are responsible for enforcing a variety of different laws which  are particularly oppressive towards  and/or disproportionately affect transgender people. The Mayor and City Council have the power to change local laws and policies to be more trans friendly. The police and sheriffs have the power to change how they treat transgender people with whom they come into contact.

For those less familiar with the specific issues facing transgender people, I’m going to go into some of them here. I would add that these are also issues affecting other members of our communities struggling to survive. I’m intentionally limiting the discussion of these issues here to focus on the impacts specifically to transgender people.

As long as the Mayor, City Council and Police departments only give us fancy words and handshakes a few times a year, transgender people will suffer. In this case, suffering means being harassed, assaulted, homeless, sick, poor, raped, and murdered. This is a matter of life and death, which is why the proclamation read yesterday was so insulting.

As long as transgender people have no job protection, they will suffer.  Because there are no laws in Virginia to protect transgender people from being unfairly fired, their unemployment, poverty, and homeless rates are higher, and they will do what they need to in order to survive which sometimes means taking risks or breaking the law.

As long as clean needles are illegal, and as long as police enforce laws to prevent needle exchanges, transgender people will suffer. Transgender people need legal access to clean needles to prevent infection and disease, to ensure their ability to take the hormones and medicines they need to survive, and to stay out of the criminal ‘justice’ system.

As long as two members of the police department glad hand at a few LGBTQ events a year but don’t actively disrupt the culture of police brutality that LGBTQ people bear the higher brunt of, transgender people will suffer.

What was offered by the Richmond Police Department and City Council on Tuesday was not enough. If the police and City Council want the benefit of looking good in front of the LGBTQ community and broader Richmond community, let’s make them earn it.

Some links with more information on the issues covered here, please check them out and further educate yourself and those around you!

mokarnage [at] gmail.com
By Appointment Only